I hate to complain so much, but having spent my third 8- to 10-hour stretch using a really bad application this month, I'm compelled to say something. Today's Messed-Up App: the economy-class seat in an American Airlines Boeing 777 aircraft.

Alright, I get that in economy class, you're not going to get five feet of legroom, or 30-inch wide seats that lie flat or spin to face each other. That's okay. What I do get is transportation to Europe with a cash savings, relative to an upgraded fare, sufficient to purchase—if I wanted—this Rolex. And, actually, it's really nice how each seat in economy class has its own in-seat audio/video unit. You can watch whatever you want back there. Or nothing at all. That's very nice.

But the way someone designed the A/V remote control into the armrest is just wrong. Each remote snaps into a compartment designed into the top of the armrest. Here's what it looks like. 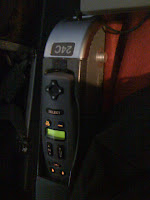 The remaining decision is influenced by the following observation: If you leave the A/V remote in its cradle, your arms inadvertently push buttons "TV On/Off" or "Channel Up/Down". Fortunately, the "Call Attendant" button is difficult to press accidentally. The other choice is to take the remote out of its cradle and put it in your lap so that you won't accidentally press the buttons while you're watching 30 Rock. The problem with taking the thing out of its cradle is that resting your arm on the resulting pointy-thinged-chasm becomes really uncomfortable by the time you've sat there for a while.

Oh, and you don't get to make a choice for your other armrest, which looks like this: 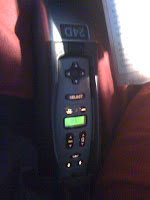 ...Whose buttons you're pushing accidentally with your other elbow, if you happen to be wider than your neighbor.

The only decent workaround I've found is to put your pillow underneath your arm on one side, and your blanket on the other. This brings other troublesome compromises into play, which I won't go into. One of them requires communicating with your neighbor.

The whole point, and what I believe makes this story relevant for software developers, even if you don't travel economy class to Europe very often, is this. People who design things need to actually use the things they design. If the person in charge of designing seats for American Airlines' Boeing 777 aircraft had been required to sit in a prototype of this particular seat for the 8-hour flight from DFW to LHR (or even better: the 10-hour ride back), this seat would never have made it into production.

People should test their designs by actually using them, under circumstances as similar as possible to the actual circumstances that the users of the design will endure.

You have no idea how recognizable this post is. When we had our return flight from Hotsos, I almost killed my passenger Gerwin who was sleeping next to me and inadvertently almost blew out my eardrums after pushing the volume buttons in his sleep...

Gerwin survived the trip to Europe by the way

Just very happy I survived the attack from Marco at the backtrip.... To prevent my own eardrums, I put my A/V remote control in the bag in front of me. I wonder....

Hi Cary. It seems I am not alone in spending my time in economy searching for and getting all het up about design flaws!
I reckon they still don't have it right in the A380!