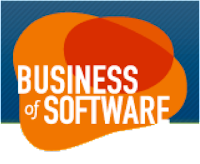 Yesterday was a hard act to follow, but today met the challenge. Today's roster:
Some of today's highlight ideas for me (again, with apologies to the speakers for the crude summarization):
Steve Johnson and Steve Krug gave truly superb presentations. Steve Krug I knew about beforehand, from his book. Steve Johnson I did not know, but I do now. These are people I'll take courses from someday. And of course, Joel Spolsky... I had seen him speak before, so I knew what to expect. He's one of the best speakers I've ever watched. I've asked him to keynote at Hotsos Symposium 2009. We'll see what he says.
Posted by Cary Millsap at 7:15 PM

Joel Spolsky as a speaker on Hotsos...

That would be realy, realy cool

Creating more artifacts ... is no answer.

Probably taking things out of context ... but there is a bit of irony in that it was said in a marketing conference.