Dad, do I really need math?

My kids are pretty good about their math homework. They seem to enjoy it for the most part. It wasn't always that way. When the going gets tough, the natural human response, it seems, is to quit. So at times in our kids' school careers, their Mom and I have had to hang tough with them to try to make them do their homework. (The credit here belongs to their Mom.)

I couldn't have told you, when I was 10 years old, that I'd need to understand queueing theory one day in order to finish an Oracle project I had to do for Fidelity Investments. Or that I'd be able to win a Jim Sundberg autographed World Series baseball by using the distributive law of multiplication in my head while he was showing 400 people how Gaylord Perry liked his signs on the mound. It didn't matter to me, because I just had faith that there was a good reason I was supposed to learn everything I could in school. Having that particular faith was no accident.

I don't remember my Mom and Dad ever forcing me into doing math. I knew, of course, that it was My Job to do as well as I could in school ('A's are loafing unless they're '100's). But I don't remember ever feeling forced.

One of the things I fondly remember my Dad doing with me was glide slope calculation. Dad flew for many years for United Airlines. He retired as a 767 captain a long time ago. One of his priorities as a professional was to conserve fuel for his employer. It used to bug him when a pilot would constantly monkey around with the throttle during the approach to a landing. My Dad told me his goal on approach was to dial back the power one time at cruise altitude, at the very beginning of the descent, and then never touch it again until he turned on the thrust reversers after touchdown.

So he played this game with me, especially on car rides, because it was a 30-minute drive each day to where I went to grade school. He'd give me the altitude we were at and the altitude we needed to descend to, and either a time limit or the number of miles outbound we were. Then he'd ask me to calculate the sink rate in my head. He put triangles into my brain that I could see every time he asked me a question like that, and I'd hatch on it with him until we came up with the right sink rate. Or he would ask me things like, if the nose is pointing to heading 026, then what heading is our tail pointed at. So he put circles into my brain, too.

Every once in a while—oh, and I loved this—he would give me a paper flight plan form, with dozens of tiny cells to fill in, and I would fill them all in. I was 6 or 7 when we was doing that. I of course didn't know how to do it correctly, but I filled it all in anyway. Whenever I was really worried about doing it "right," I'd ask my Dad, and he'd tell me the kinds of things I should write down and which cells I should write them in.

You know the biggest value of that flight planning experience? It was that I couldn't wait to find out in school someday what point meant. You know, as in "three point five." I remember the day in class when a teacher finally taught us about decimal points. I felt sooo cool because now I knew what "three point five" actually meant.

My Dad did things with me that got me interested and excited about doing math, all on my own, without making me feel like I was being punished by it. Thus the abundance of wonderful opportunities that I have today are largely a continuing gift from him. I hope that another gift he gave me is the ability to be a good enough dad myself for my own kiddos, but of course I worry that I'm not doing it enough, or well enough. Telling stories about it helps remind me how important it is. 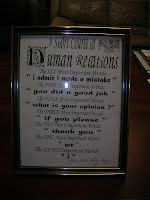 What reminded me of all this is a little document called "A Short Course in Human Relations," autographed by Bobby Bragan. It sits here in the foyer of our Method R office. I see it every single time I walk through our door. You've probably heard the following statement:


Say you were standing with one foot in the oven and one foot in an ice bucket. According to the percentage people, you should be perfectly comfortable.

Bobby Bragan said that; I think it was in 1963. It is a classic illustration of skew, which is vitally important to my career. Bobby Bragan, though, is an American hero for lots of good reasons. You should read about him.

Well, one night a few years ago, I got to watch Bobby Bragan speak to a small group. His talk was fascinating. He brought a huge box of stuff up to the podium with him, and he warmed up with a game. He opened by pulling something out of the box and saying whoever can answer this riddle gets the prize. The first one was something like, "What has eighteen legs and two breasts?" Shocker, right? The answer was The Supreme Court. Whoever said that, Bobby Bragan tossed him the first prize of the night.

Pretty deep into his speech, he must have given out twenty prizes to people. Not me. I either didn't know the answer, or I didn't say it loud enough or fast enough. I watched prize after prize go out, until he brought out this autographed document called "A Short Course in Human Relations." He read it aloud. It was an important part of his speech. And then he asked the question that went with it: "Nine ballplayers come out of the dugout before each game, and each ballplayer shakes the hand of every teammate. How many handshakes is that?" The voice that said "thirty-six" was mine. I was doggone lucky that Bobby Bragan had asked a bunch of baseball players a math question, and right on the prize that I really wanted, too.

Math. You really never know when you're going to need it.
Posted by Cary Millsap at 8:45 AM

Phenomenal, how do think like that and have Mogens as a friend? I guess that is another statistical way of saying you are normal.

Thanks, Aman. Nuno, yes, I think we're on the same track.

I was teaching my niece a card trick last night and after I went through it once she just smiled at me and said "Well duh Aunt Karen! That's just math!".

I smiled and said "exactly!".

Nice post, we all, all the time need Math :)

On Saturday, I watched my kid in a math competition for ~12-year-olds, put on at UCSD as part of an engineering society recruiting future engineers.

Most of the competition was cloistered, but at the end they had a final competition amongst the best individuals (there were also teams). These kids could answer the questions correctly before I could even read them (and I'm a fairly fast reader). They also had a "scream out the answer part," amazing enthusiasm.

Anyone who ever complains about "kids these days..." I gotta say, they aren't talking about these kids.

One team in the top ten was all girls.

Arnold Schwarzenneger is cutting the funding for our science and technology magnet schools, his political philosophy having some odd faith that not raising taxes magically makes more money.


Joel,
You should look into some other math, particularly the laffer curve. On the x axis draw the tax rate from 0% to 100%. On the y axis is revenue. At 0% taxation you get $0 revenue. At 100% you get, how much? Right, $0 revenue. no one works for zero money. Between those two intercepts draw a parabola. Now pick a point on etiher side of the maximum. If you are to the left side of the maximum, lowering the rate lowers the revenue. That's obviously where you believe we are. If you pick a point to the right of the maximum, lowering the rate increases the revenue. It's a pretty basic principle that's hard to argue with. If the question is how to maximize government revenue then the only debate left is which side of the maximum are we on.

On the other hand, some of us think that's not the question to ask in the first place. ;-)

Mark, the first part of your comment reminds me of the thing my Mom and Dad used to tell me about school. It's what I put in the acknowledgments section of the Optimizing
Oracle Performance book: "There are two answers to every question your teachers will ask you while you're at school. There's the correct answer, and there's the answer that the teacher wants. I expect you to know them both."

With regard to the second part, your post rang a bell. I had to look, though, at a picture to remember what the Laffer Curve looked like.

Mark, I live where Reaganomics began 30 years ago. The principle only "works" for short periods of time. After 30 years, things are fupped, there's no money for simple maintenance of infrastructure, even rich people like Warren Buffet say their property taxes are too low (google him with Proposition 13). Sort of silly like those people who complain about their Oracle7 breaking these days, you gotta maintain or you are gonna break bigtime.

Hey Cary,
I think that reading really is a tool that should be utilized to our very best ability. I mean it does nothing but enhance our reading skills. But then again, most people think that by reading you are gaining knowledge, which they are correct! But what kind of knowledge are they gaining? Is it True? Is it False? Now a days, people conceive the notion of believing everything that is on paper or screen simply because it is "written"
If we all take a look outside the box, we can see that what we read is just a compiled amount of researched data, but then again, it does not necessarily mean it is all true most of the time. Especially if children read the mass amounts of data that is available on the internet now a days, it could be beneficial on the reading part of it, but the knowledge should be double checked on the content itself sometimes. But then again, it is a choice to believe what they read or not, and that is part of the maturing process. Whether what they read is true or not, it is still something that can be expanded into ones own pre-conceived imagination.
Dell laptop lcd screens

Epic, I think information is a lot like food. Just because it's edible doesn't mean you should eat it.

Looking at the calendar I see that yesterday was two years to the day since the great Bobby Bragan died at his home in Fort Worth. R.I.P Bobby.